SOLD OUT - An Evening of Peerless Crime 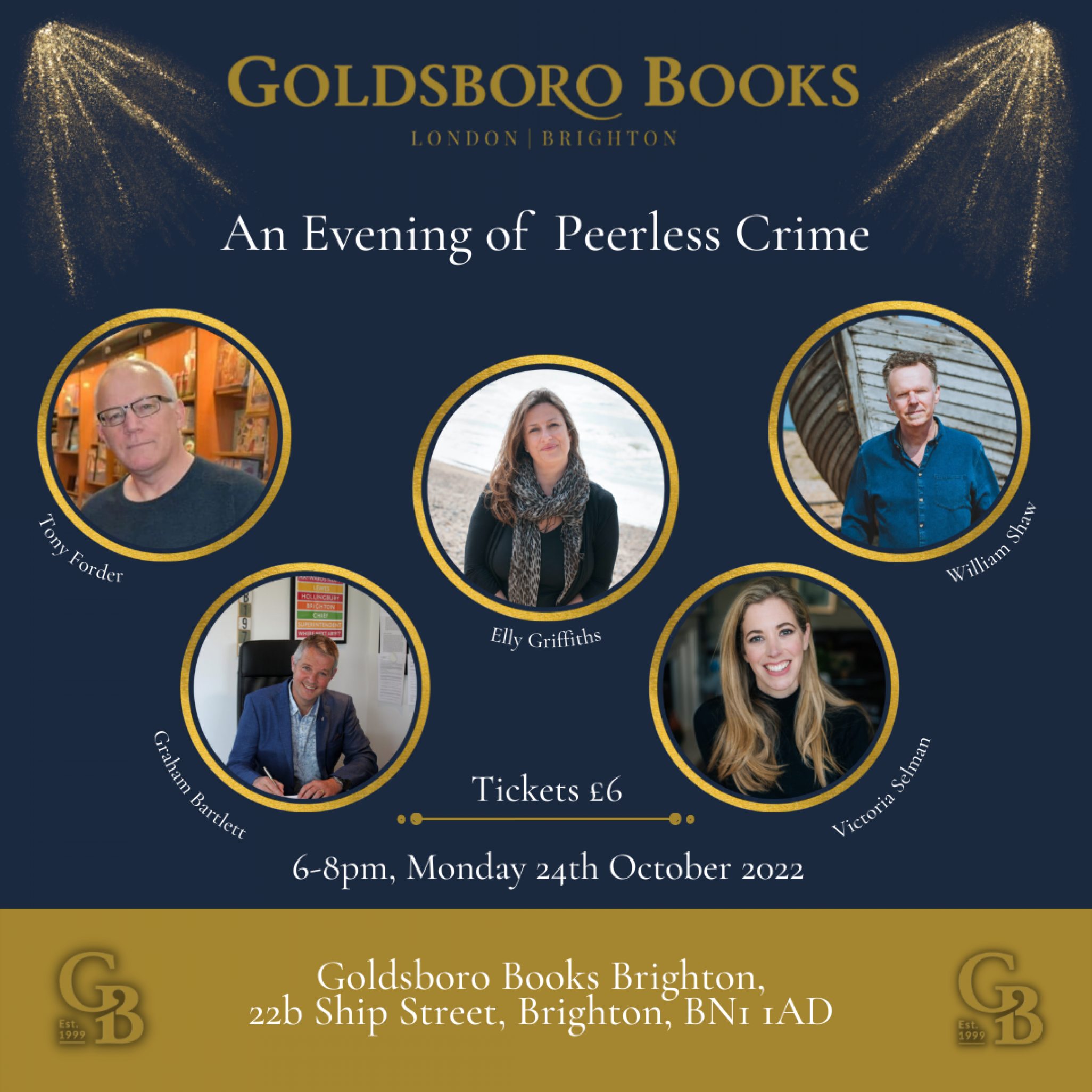 PLEASE NOTE: THIS EVENT IS NOW SOLD OUT

Join us for an "evening of peerless crime fiction", where welcome five authors, at the top of their game.

We will be hearing readings from each author, and their most recent book, and then a signing will take place afterwards - books will be available to purchase on the night.

Allow us to tell you a little bit more about our featured authors:

Tony J Forder is the author of the bestselling DI Bliss crime thriller series. The first seven novels, Bad to the Bone, The Scent of Guilt, If Fear Wins, The Reach of Shadows, The Death of Justice, Endless Silent Scream, and Slow Slicing, were joined in December 2020 by a prequel novella, Bliss Uncovered. The series continued with The Autumn Tree and Darker Days to Come. Tony’s other early series – two action-adventure novels featuring Mike Lynch – comprises both Scream Blue Murder and Cold Winter Sun. These books will hopefully be joined in 2023 by The Dark Division. In addition, Tony has written two standalone novels: a dark, psychological crime thriller, Degrees of Darkness, and a suspense thriller set in California, Fifteen Coffins.

Graham Bartlett was a UK police officer in Sussex for thirty years and now he is a best-selling crime writer. He mainly policed the city of Brighton and Hove, rising to become a Chief Superintendent and its police commander. As well as writing, Graham is a police procedural and crime advisor helping scores of authors and TV writers (including Peter James, Mark Billingham, Elly Griffiths, Claire McGowan and Dorothy Koomson) achieve authenticity in their drama. His first fiction novel, Bad For Good, was published in June 2022.

Elly Griffiths was inspired to start writing the Dr Ruth Galloway Mystery series after her husband gave up a city job to train as an archaeologist. Further inspiration came from her aunt who lives on the Norfolk coast and who filled her head with the myths and legends of that area. Elly has two children and lives near Brighton. Her first novel, The Crossing Places, was shortlisted for the Theakston’s Old Peculiar Crime Novel of the Year Award and the Mary Higgins Clark Edgar Crime Novel of the Year Award.

Victoria Selman read History at Oxford University and holds certificates in criminal profiling and criminal psychology. She is the author of the Ziba MacKenzie criminal profiler series (Thomas & Mercer). Her first novel, Blood for Blood was an instant Amazon #1 bestseller topping the Kindle charts for five weeks. It was shortlisted for the CWA Debut Dagger Award and has sold over half a million digital copies. Her most recent novel, Truly, Darkly, Deeply, was a Sunday Times bestseller and was released in July 2022.

William Shaw's The Trawlerman is the fourth in his series featuring set in Dungness and featuring DI Alex Cupidi, who originally appeared as one of the characters in his 2016 novel The Birdwatcher. Writing as G. W. Shaw, Dead Rich is his first adventure thriller. William Shaw has been longlisted three times for the Theakston’s Old Peculier Crime Novel of the Year and the CWA Historical Dagger and shortlisted for a Barry Award, The CWA Golden Dagger and the Golden Bullet.

All Of Our Demise - Limited Edition Christine Herman
£25.00
Pre-order