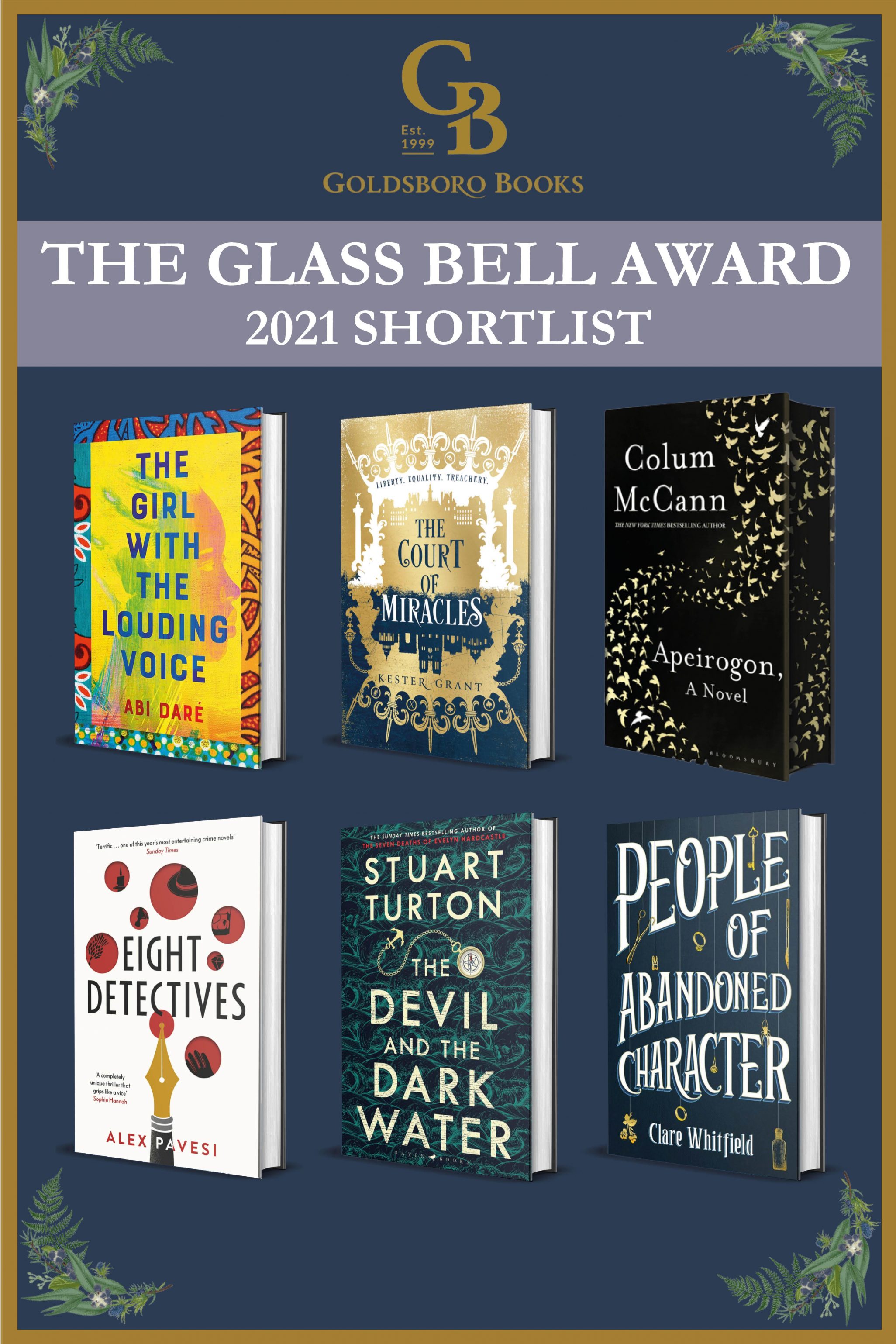 A Booker-longlisted exploration of the Israel-Palestine conflict; the second novel from the Costa-winning Stuart Turton and a British Book Award-shortlisted story of a young Nigerian girl’s struggle for an education are amongst the six titles shortlisted for the 2021 Goldsboro Books Glass Bell Award, announced today (Thursday 5th August).

Critically acclaimed novelist Colum McCann leads the shortlist for his powerful seventh novel Apeirogon, which was longlisted for the 2020 Booker Prize. Also shortlisted is The Devil and the Dark Water, the highly anticipated second novel from Stuart Turton, whose debut The Seven Deaths of Evelyn Hardcastle was longlisted for the 2019 Glass Bell, as well as winning the Costa First Novel Award

They are accompanied by four celebrated debut novels across a range of genres: Eight Detectives by Alex Pavesi, acclaimed as an inventive and exciting reworking of the detective novel; The Girl with the Louding Voice, Abi Daré's New York Times bestseller about a young Nigerian housegirl fighting for her freedom and her education; People of Abandoned Character by Clare Whitfield, a historical thriller about a woman who suspects that her husband could be Jack the Ripper; and The Court of Miracles by Kester Grant, a fantastical reimagining of the French Revolution featuring the characters of Les Misérables.

David Headley, Goldsboro Books co-founder and MD, and founder of the Glass Bell, says: "For five years now, the Glass Bell Award has sought to celebrate the best of contemporary fiction, regardless of genre or stage of the author’s career, and this year is no exception. The 2021 shortlist may be the most innovative and outward-looking yet, with its international focus and the way it plays with the literary canon. Our judging discussions are always lively, but with these powerful literary novels, imaginative historical thrillers, whirlwind bestsellers – and four superb debuts which deserved more attention in a very busy year, I’m sure we’ll all have a lot to say this year!”

Judged by David and his team at Goldsboro Books, the Glass Bell is awarded annually to a compelling novel, of any genre – from romance and thrillers, to historical, speculative and literary fiction – with brilliant characterisation and a distinct voice that is confidently written and assuredly realised. The winner, who will be announced on Thursday 30th September, wins £2,000 and a beautiful, handmade glass bell.

This Much Is True Miriam Margolyes
£20.00
Pre-order