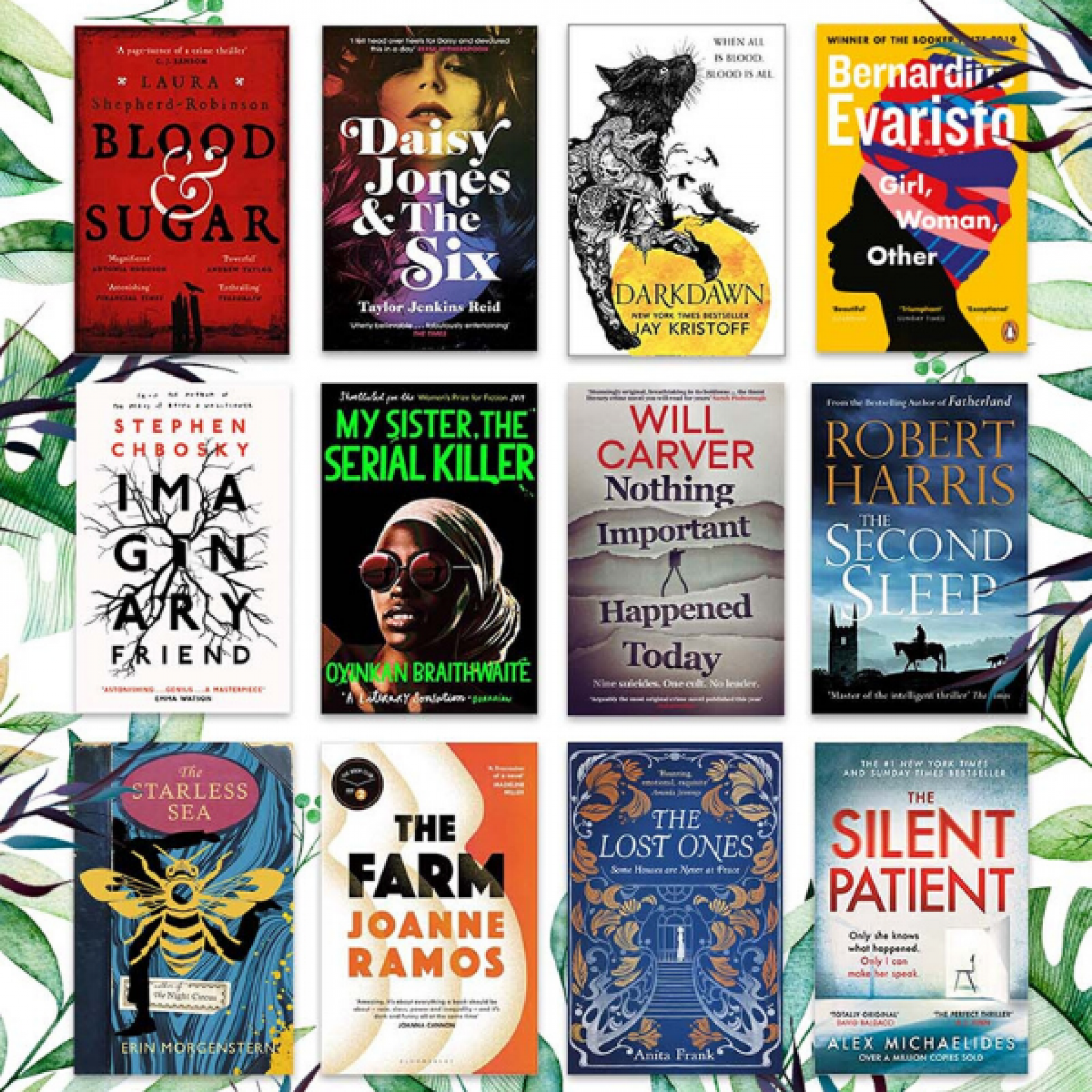 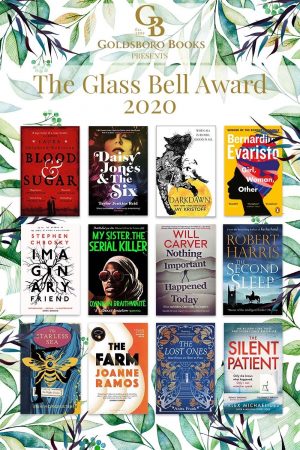 Today, we are delighted to announced the twelve titles longlisted for the 2020 Glass Bell Award, the prize which celebrates the best storytelling across contemporary fiction. A longlist which sees an incredible range of genres represented, it includes a Booker-winning exploration of black womanhood in Britain; a speculative thriller which imagines the world 800 years after a complete technological collapse; and two serial killer thrillers – with a twist!

Bernardine Evaristo’s Girl, Woman, Other and Oyinkan Braithwaite’s debut My Sister the Serial Killer are both on the longlist – their latest literary nominations. Both were longlisted for the Booker, ultimately won by Evaristo (jointly with Margaret Atwood) and both have been shortlisted for a British Book Award. In addition, both have been shortlisted for the Women’s Prize, although in different years. They are joined by international bestseller Robert Harris’s latest #1 bestseller The Second Sleep.

Also on the longlist are the long-awaited second novels from Erin Morgenstern, whose debut The Night Circuswas a New York Times bestseller eight years ago, and from author and screenwriter Stephen Chbosky, whose hugely successful coming of age novel The Perks of Being a Wallflower was made into a film starring Emma Watson, Logan Lerman and Ezra Miller. Morgenstern’s new novel The Starless Sea is an ambitious fantasy novel about a quest launched by a mysterious library book, described as ‘assuredly beautiful’ by The Guardian, whilst Chbosky’s new novel Imaginary Friend is a departure – a terrifying Stephen King-esque horror story.

As well as My Sister the Serial Killer, four other critically acclaimed debuts have made the longlist: Joanne Ramos’s The Farm, an alarming dystopia about the commercialisation of the fertility industry which was a BBC Radio 2 Book Club pick; The Silent Patient by Alex Michaelides, a million copy bestselling thriller with an unguessable twist; Blood & Sugar by Laura Shepherd- Robinson, a historical crime novel set in eighteenth century, about the disappearance of an abolitionist; and The Lost Ones by Anita Frank, a spine tingling ghost story reminiscent of the works of Susan Hill.

Rounding off the list is Nothing Important Happened Today by international bestseller Will Carver, a pitch black noir thriller about an unstoppable cult; Daisy Jones and the Six, Taylor Jenkins Reid’s breakthrough novel about the internal dramas and excesses of a 70s rock band; and Darkdawn, the epic third and final chapter of Jay Kristoff’s celebrated Nevernight series.

David Headley, Goldsboro Books co-founder and MD, and founder of the Glass Bell, says: ‘When I launched the Glass Bell Award in 2017, it was to shine a light on the wonderful storytelling found in contemporary fiction, that can so easily be overlooked by subjective genre boundaries. As authors increasingly take risks, play with words, and push the boundaries of genre to new limits, compiling our longlist becomes more and more exciting every year.

The books on this year’s longlist all spoke to our team of judges in many ways. Each one is a genuinely unique tale for our time, from unlikely serial killer thrillers, to tales of rock and roll excess from the 1970s; from terrifying ghost stories to two incredibly different, but nonetheless equally believable and relevant dystopias; four very talented debut novelists and of course the hugely deserving winner of last year’s Booker prize! Narrowing it down to a shortlist of six is both an exhilarating and daunting challenge.’

The Glass Bell Award is judged by all of us here Goldsboro Books. It is the only prize that rewards storytelling in all genres – from romance, thrillers and ghost stories, to historical, speculative and literary fiction – and is awarded annually to ‘a compelling novel with brilliant characterisation and a distinct voice that is confidently written and assuredly realised’. The shortlist of six will be announced on 11th May, with the winner, who will receive both £2,000, and a beautiful, handmade, engraved glass bell, to be announced on 2nd July.

Launched in 2017, the Goldsboro Books Glass Bell Award is awarded annually to an outstanding work of contemporary fiction, rewarding quality storytelling in any genre. The winner of the Glass Bell will receive £2,000 in prize money, and a handmade, engraved glass bell. The jury of ten consists of team members from Goldsboro Books, DHH Literary Agency and The Dome Press. There is no fee, or limit to the number of books that a publisher may submit, allowing both established and debut authors a chance to win. Previous winners are Chris Cleave, for Everyone Brave is Forgiven (Sceptre), John Boyne for The Heart’s Invisible Furies (Transworld) and Christina Dalcher for VOX (HQ).