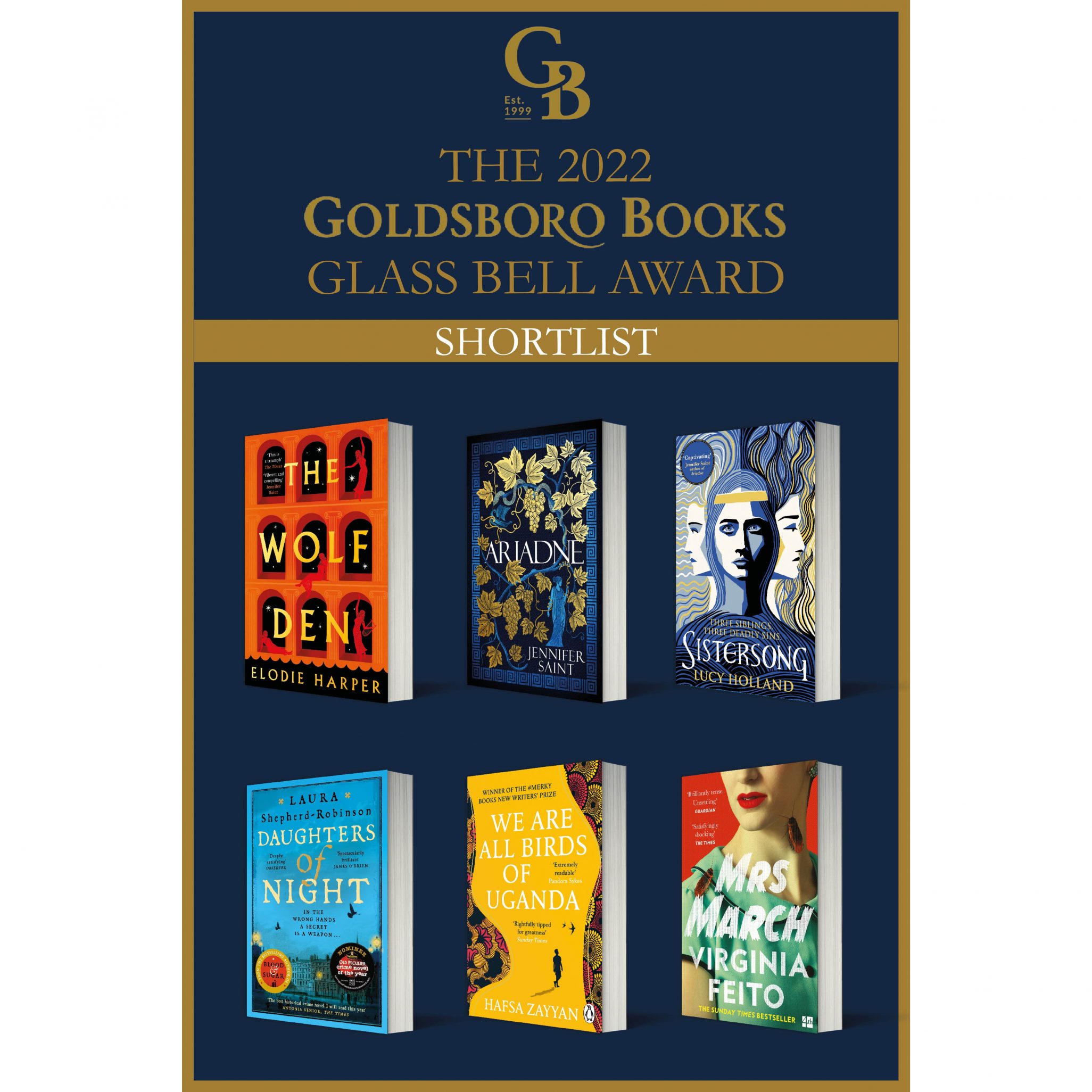 Debut novels are well represented on the all- female shortlist, which includes the powerful We Are All Birds of Uganda by Hafsa Zayyan, winner of Stormzy’s inaugural #Merky Books New Writers’ Prize; Sistersong by Lucy Holland, a lyrical reimagining of an English folk ballad set during the Saxon invasion of Ancient Britain; Ariadne, the Sunday Times bestselling feminist retelling of the Minotaur myth from Jennifer Saint; and Mrs March, a startlingly nightmarish comedy of manners by Virginia Feito.

Completing the shortlist is The Wolf Den by Elodie Harper, a compelling tale of sisterhood set in Pompeii’s most famous brothel, and Daughters of the Night, a chilling murder mystery by Laura Shepherd-Robinson, whose debut Blood & Sugar was shortlisted for the 2020 Glass Bell Award.

David Headley, Goldsboro Books co-founder and MD, and founder of the Glass Bell, says:
“We’ve always been keen to celebrate all genres with the Glass Bell, and these novels all push at the boundaries of historical, literary and crime fiction. These incredible books all take the past as a starting point – from feminist and LGBTQ+ retellings of myths and legends, to a murder mystery set in Georgian London and stories of family and madness set in mid-century Uganda and New York. But most importantly of all, they are all enthralling stories.

We’ll be having some lively conversations around these books in the coming weeks!”

The Glass Bell Award is judged by David and his team at Goldsboro Books. It is the only prize that rewards storytelling in all genres- from romance, thrillers and ghost stories, to historical, speculative and literary fiction- and is awarded annually to ‘a compelling novel with brilliant characterisation and a distinct voice that is confidently written and assuredly realised’. The winner, who will receive both £2,000, and a beautiful, handmade glass bell, to be announced on Thursday 8th September.

Last year, debut author Clare Whitfield was announced as the fifth winner of the prize for her historical thriller, People of Abandoned Character. A thrilling and atmospheric take on the Jack the Ripper story, published by Head of Zeus, was selected for its ‘fresh and unique’ approach to the story by the 2021 jury, who called it ‘a thoughtful and compelling exploration of the endless violence faced by women of all walks of life.’

All Of Our Demise - Limited Edition Christine Herman
£25.00
Pre-order