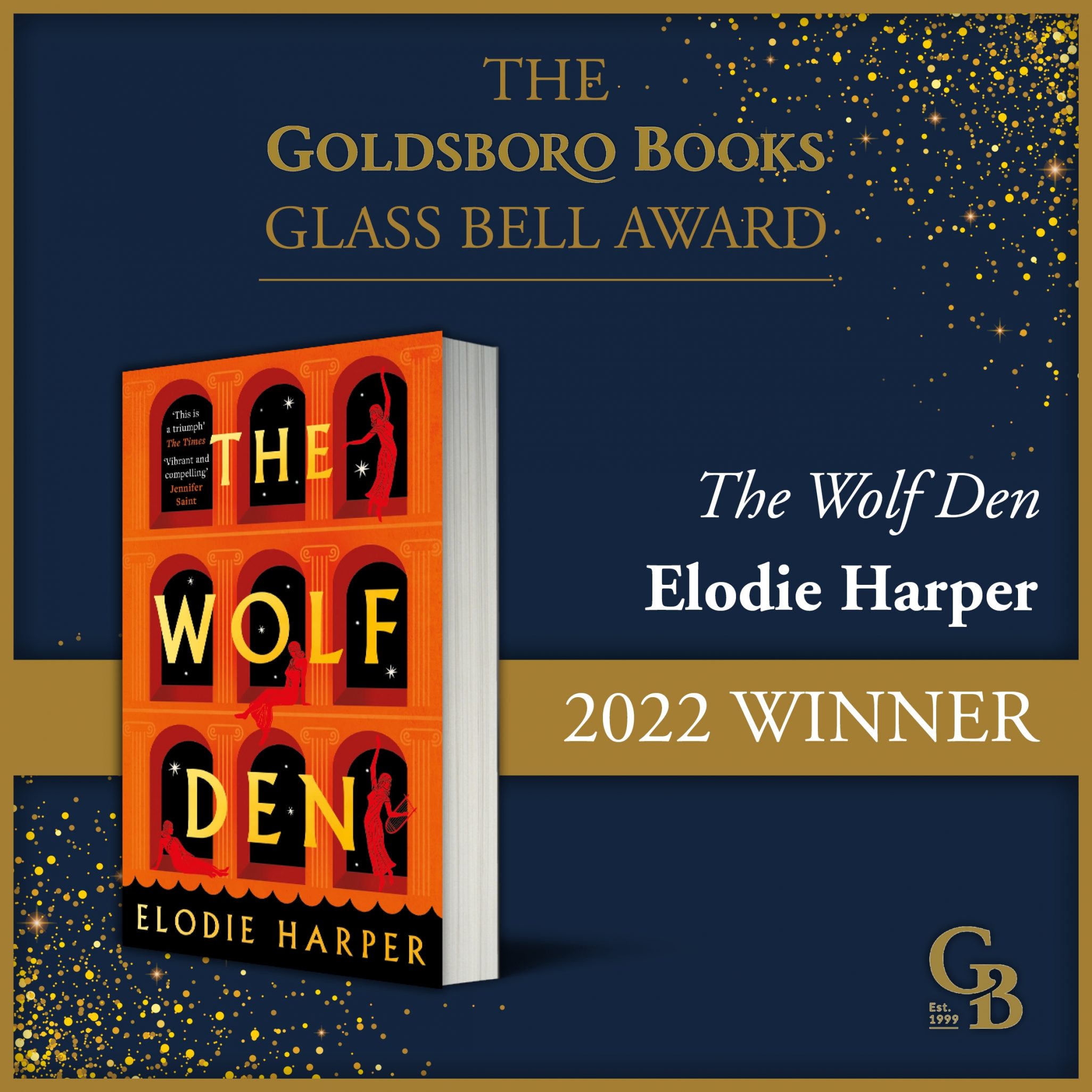 ITV Anglia reporter and prize-winning short story writer, Elodie Harper has been awarded the Goldsboro Books Glass Bell Award 2022 for The Wolf Den, the first novel in a new trilogy re-imagining the lives of the forgotten women of Pompeii’s brothels, published by Head of Zeus. It follows Amara - a young woman sold into slavery and sent to work at Pompeii’s famous brothel - who is determined to regain her freedom. Elodie Harper won praise from the judging team for her ‘rich and immersive’ novel, which they called ‘mesmerising’.

David Headley, co-founder of Goldsboro Books, and founder of the Glass Bell Award said: “This year’s all female shortlist was particularly compelling, traversing centuries of history – from Ancient Britain to 1960s Uganda – and spotlighting the voices history has often neglected or silenced. It was a tough challenge to select our winner from such a fantastic line-up, but our team at Goldsboro Books were consistently drawn back to Elodie Harper’s mesmerising The Wolf Den. With rich and immersive historic detail, Harper brings to life the untold stories of the women enslaved in Pompeii’s most notorious brothel, powerfully exploring bonds of sisterhood as they navigate a brutal world without personal freedom. We’re thrilled to award the Glass Bell to Elodie Harper and cannot wait for the final instalment of this fantastic trilogy!”

Founded in 2017, the Glass Bell is awarded annually to a compelling novel, of any genre – from romance and thrillers, to historical, speculative and literary fiction – with brilliant characterisation and a distinctive voice that is confidently written and assuredly realised.

Last year, the debut novelist Clare Whitfield was awarded the Glass Bell for her ‘fresh and unique’ and ‘compelling’ People of Abandoned Character, which offered a new perspective on the Jack the Ripper murders. Previous winners are Daisy Jones and the Six by Taylor Jenkins Reid, Everyone Brave is Forgiven by Chris Cleave, VOX by Christina Dalcher and The Heart’s Invisible Furies by John Boyne.


The Wolf Den by Elodie Harper (Head of Zeus)
Amara was once a beloved daughter, until her father’s death plunged her family into penury. Now, she is owned by a man she despises and lives as a slave in Pompeii’s infamous brothel. But Amara’s spirit is far from broken. Sharp, resourceful and surrounded by women whose humour and dreams she shares, Amara comes to realise that everything in this city has its price. But how much will her freedom cost?

Elodie Harper is a journalist and prize-winning short story writer. She is currently a reporter at ITV News Anglia in the East of England. She is the author of The Wolf Den, the first in a trilogy of novels set in ancient Pompeii. She is also the author of two thrillers, The Death Knock and The Binding Song.

Launched in 2017, the Goldsboro Books Glass Bell Award is awarded annually to an outstanding work of contemporary fiction, rewarding quality storytelling in any genre. The winner of the Glass Bell will receive £2,000 in prize money, and a handmade, engraved glass bell. The jury of ten consists of team members from Goldsboro Books. There is no fee, or limit to the number of books that a publisher may submit, allowing both established and debut authors a chance to win.

Previous winners are Chris Cleave, for Everyone Brave is Forgiven (Sceptre), John Boyne for The Heart’s Invisible Furies (Transworld), Christina Dalcher for VOX (HQ), Taylor Jenkins Reid for Daisy Jones and the Six (Cornerstone) and Clare Whitfield for People of Abandoned Character (Head of Zeus).

Goldsboro Books is an independent bookshop, based in central London, specialising in signed first edition books. Providing an expert, knowledgeable team and a carefully curated range is at the heart of the business, delivering the best book-buying experience for every customer. Goldsboro Books aims to interest and inspire book lovers, readers and collectors and provide the finest quality signed books in the world. Goldsboro Books was founded in 1999 by two friends and book collectors David Headley and Daniel Gedeon. Their reputation for spotting quality books early on, an expert eye on the future collectibles, along with enthusiasm and passion for bookselling excellence has grown with the business and Goldsboro Books has become a world-famous and much-admired bookshop. Their global reputation grew in 2013 when they were the only bookshop in the world to have signed copies of The Cuckoo’s Calling by Robert Galbraith, who of course turned out to be none other than J.K. Rowling.