We are SO excited to have a cover reveal for you today!

Last December, our Book of the Month was Defender by G X Todd, the first in a fantastic new series reminiscent of Stephen King's The Stand, or indeed work by Neil Gaiman and Joe Hill. Today we have the cover of HUNTED to show you, and how brilliant it is... If post-apocalyptic thrillers are your thing, you must read this series. Anyway, without further ado, we have the sensational cover for you, along with some thoughts from Gemma. 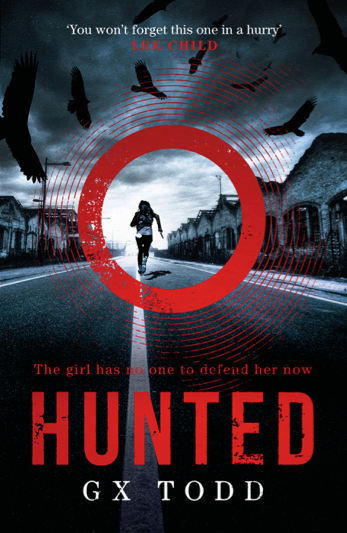 A title can say a lot, can’t it? It can be dynamic, evocative, intriguing. It can tell a story. And the cover design can tell multiple stories. HUNTED’s is full of movement. It’s menacing and has some seriously dark undertones. The wonderful circular design from DEFENDER has been re-purposed here to make it into a target. The girl, Lacey, is being aimed at; she’s being chased and hunted down. I love how she’s been placed off-centre in the middle of the “sights” – it gives a feeling of chaos and wildness (even the birds are wheeling in the air above her, as if they are birds of prey and she their lunch). It fits in perfectly with the cat-and-mouse chase narrative of the story.

Readers will recognise a lot of characters from DEFENDER in HUNTED, but you’ll also be introduced to a whole new cast (including Ruby’s brother, Albus, and the people he’s gathered at the Inn on the coast). HUNTED is set just a few short weeks after the events of Book 1 and Lacey has lost her protector. The world is becoming more dangerous with every passing day and she must keep her new family safe. She doesn’t know who to trust or where to turn, and hearing Voice only makes things harder. All it will take is for the wrong person to find out about him – about where he came from – and no amount of running will save them . . .

Because the Flitting Man’s influence is spreading and his followers are gathering. Ruby had warned Albus that this day would come, and now is the time to take action. But he can’t do it alone. He’ll need help, even if he has to hunt it out to find it.

You can pre-order Hunted now!