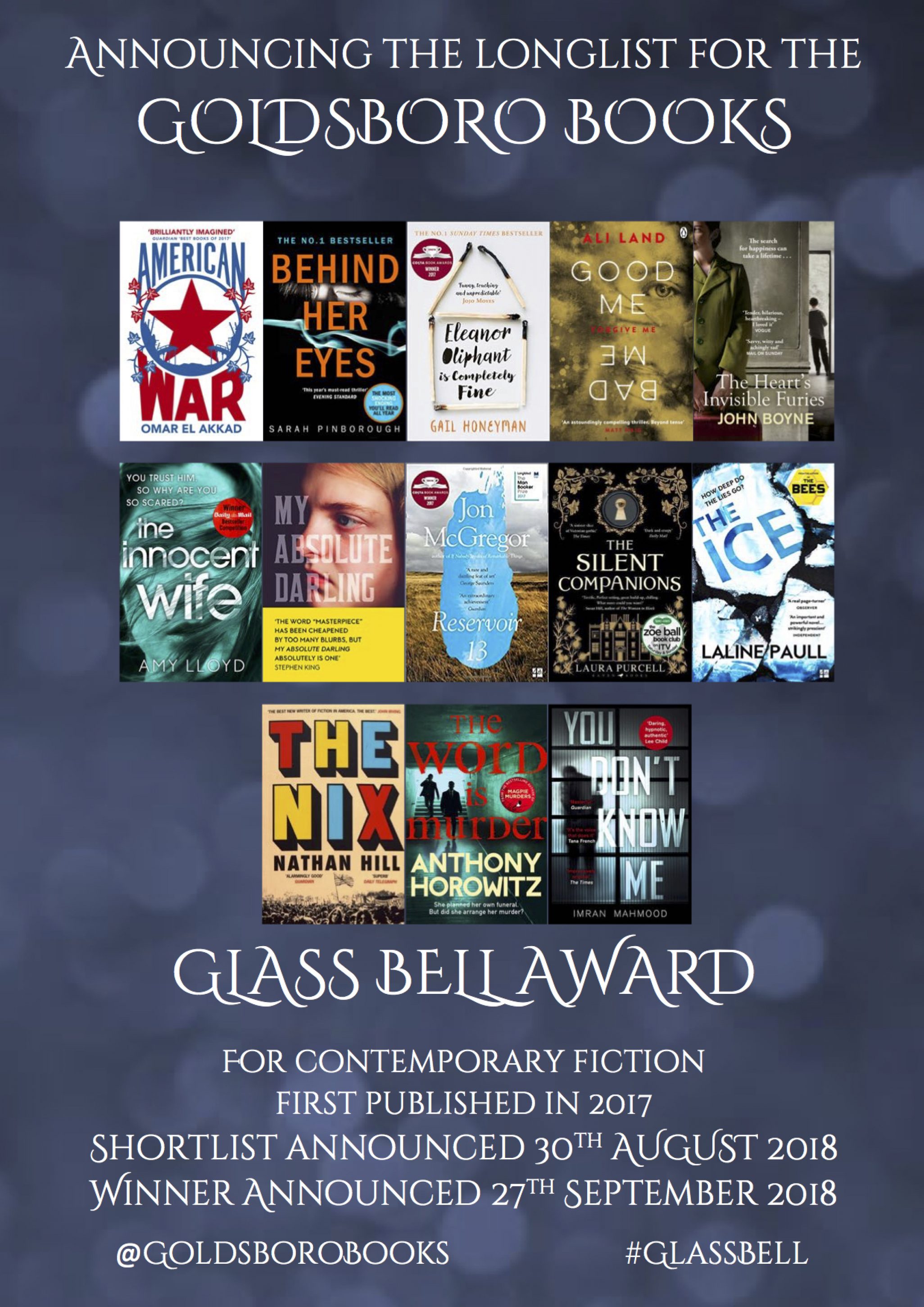 Goldsboro Books today announced the thirteen titles longlisted for the 2018 Glass Bell Award, a prize introduced last year to celebrate the best storytelling across all genres of contemporary fiction.

Seven debut novelists, including Gail Honeyman for her remarkable breakout bestseller Eleanor Oliphant is Completely Fine and Omar El Akkad, author of the disturbingly prophetic American War, compete against literary heavyweights John Boyne, Anthony Horowitz and Jon McGregor. The winner of the prize, which rewards 'compelling storytelling with brilliant characterisation and a distinct voice that is confidently written and assuredly realised', will receive both £2,000, and a beautiful, handmade, engraved glass bell, to be awarded at a party at the bookshop on 27th September 2018.

The full longlist is:

The prize is judged by Goldsboro Books founder and MD David Headley and his team at the bookshop, and the six finalists will be announced on 30th August. David says:

‘This hugely impressive longlist celebrates the depth and breadth of contemporary fiction today. Featuring both established and debut authors, it reflects an extraordinary range of themes, styles and concerns, from religious intolerance, climate change and the flaws in our justice system, to the challenges of rural life and…ghosts! Whittling down these wonderful, pacey and varied novels to just six will be a tremendously daunting process.’

The winner of the 2017 Goldsboro Books Glass Bell Award was Chris Cleave, for his extraordinary Everyone Brave is Forgiven (Sceptre), the moving and unflinching novel about the profound effects that the Second World War had on ordinary citizens back at home in Britain.

• Celebrated novelist John Boyne, author of The Boy in the Striped Pyjamas, is longlisted for his sweeping odyssey The Heart’s Invisible Furies which spans 70 years of modern Irish history.

• Leading the debuts on the longlist is Nathan Hill’s intricate and multi-stranded mystery The Nix, in which an English professor searches for the truth about his estranged mother, who has been accused of domestic terrorism.

• A remarkable debut novel about a young woman set apart from society, Eleanor Oliphant Is Completely Fine by Gail Honeyman has been met with extraordinary success, hitting The Sunday Times #1 bestseller spot, won the British Book Awards Debut of the Year, and Book of the Year, as well as being longlisted for the Women’s Prize.

• From the author of the international bestselling teenage spy Alex Rider series, and whose oeuvre also includes pastiches of both Sherlock Holmes and James Bond, The Word is Murder by Anthony Horowitz is a unique and modern mystery, which sees Anthony himself help solve a crime.

• Crime debuts have been very well represented. Ali Land’s chilling psychological suspense Good Me Bad Me, about the daughter of a child-killer, has also been a Richard & Judy pick.

• Amy Lloyd won the Daily Mail/Penguin Random House First Novel Competition with her gripping psychological thriller The Innocent Wife, about a woman who falls in love with a convicted murderer.

• Criminal barrister Imran Mahmood drew on his own experiences from the courtroom to write You Don’t Know Me, told as a monologue in which a young man accused of murder addresses the jury directly.

• Jon McGregor’s Reservoir 13, a meditation on rural life in the wake of the disappearance of a teenager, previously won the 2017 Costa Novel Award and the 2018 British Book Award Fiction Book of the Year, as well as being shortlisted for the Rathbones Folio Prize and the Goldsmith Prize, and longlisted for the Man Booker Prize.

• The Silent Companions by Laura Purcell, was a departure for the historical novelist – a spine-tingling ghost story, in which a young pregnant widow moves into her late husband’s crumbling estate, where she is haunted by disturbingly lifelike wooden figures known as companions...

• One of the most talked about debuts of 2017, My Absolute Darling by Gabriel Tallent is a harrowing story about love, abuse and wilderness.

Launched in 2017, the Goldsboro Books Glass Bell Award is awarded annually to an outstanding work of contemporary fiction, rewarding quality storytelling in any genre. The winner of the Glass Bell will receive £2,000 in prize money, and a handmade, engraved glass bell. The jury of ten consists of team members from Goldsboro Books, DHH Literary Agency and The Dome Press. There is no fee, or limit to the number of books that a publisher may submit, allowing both established and debut authors a chance to win.