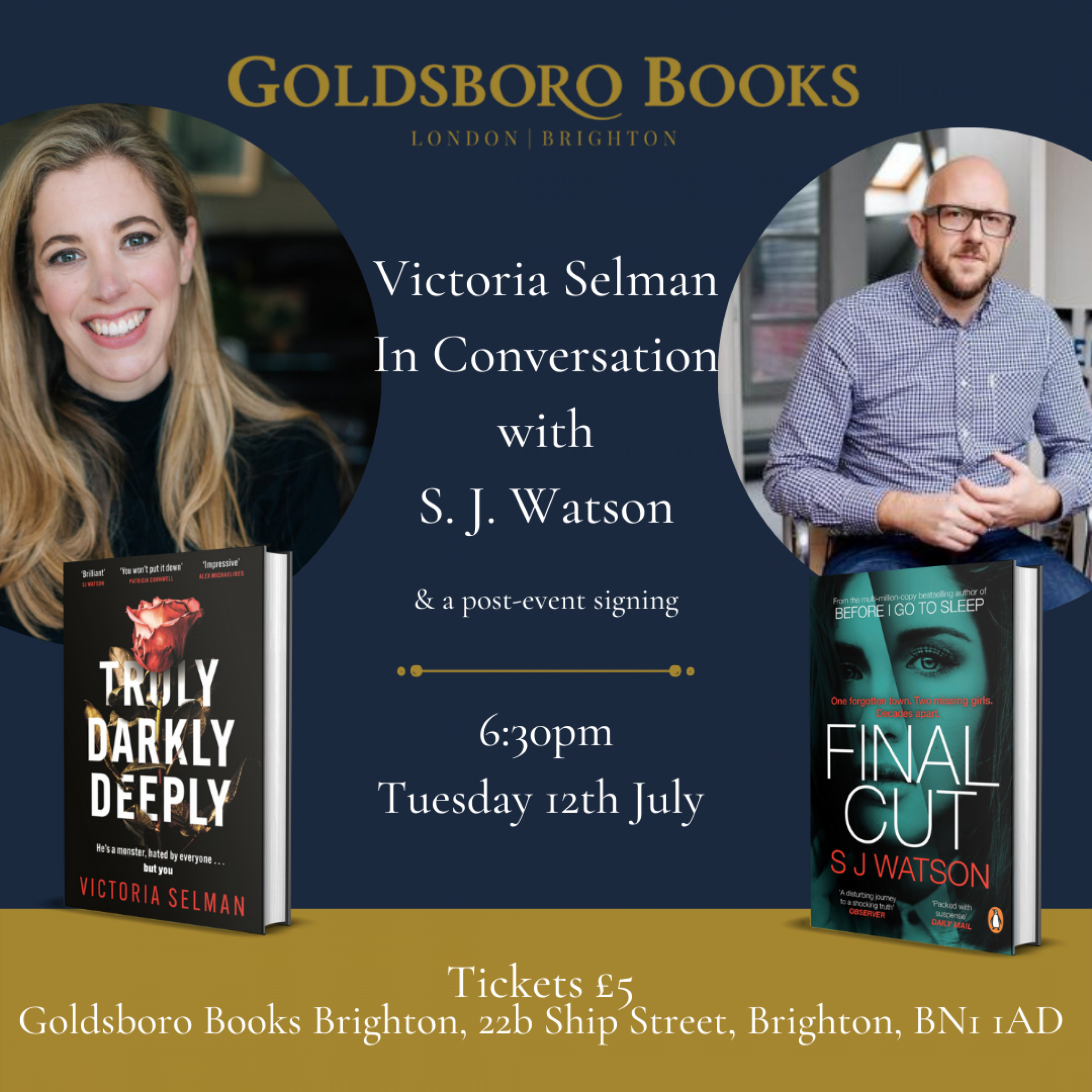 Join us for a murderously fun evening, as Victoria Selman chats to fellow author, S. J. Watson, about her highly-anticipated new novel, Truly, Darkly, Deeply - a mind-blowing and unputdownable serial killer thriller quite unlike anything else you've seen before.

Twelve-year-old Sophie and her mother, Amelia-Rose, move to London from Massachusetts where they meet the charismatic Matty Melgren, who quickly becomes an intrinsic part of their lives. But as the relationship between the two adults fractures, a serial killer begins targeting young women with a striking resemblance to Amelia-Rose.

When Matty is eventually sent down for multiple murder, questions remain as to his guilt -- questions which ultimately destroy both women. Nearly twenty years later, Sophie receives a letter from Battlemouth Prison informing her Matty is dying and wants to meet. It looks like Sophie might finally get the answers she craves. But will the truth set her free -- or bury her deeper?

As well as writing, Victoria co-hosts a true crime podcast with two other authors which was recently featured on a Sky Crime documentary. She also writes freelance opinion pieces on true crime for the Independent and presents the crime fiction podcast, Crime Time FM with Barry Forshaw and Paul Burke. the author of the Ziba MacKenzie criminal profiler series (Thomas & Mercer). Her first novel, Blood for Blood was an instant Amazon #1 bestseller topping the Kindle charts for five weeks. It was shortlisted for the CWA Debut Dagger Award and has sold over half a million digital copies.

Dubbed by The New York Times as 'an out of nowhere literary sensation', S J Watson's first novel, Before I Go to Sleep, has so far sold in 43 territories and has achieved worldwide critical acclaim as well as bestseller status in most of them. It won The Crime Writers’ Association Award for Best Debut Novel and The Galaxy National Book Award for Crime Thriller of the Year. The film of the book, starring Nicole Kidman, Colin Firth and Mark Strong, and directed by Rowan Joffe, was released in September 2014.

S J's second novel, Second Life, a psychological thriller, was published to acclaim in 2014. His much anticipated newest novel, Final Cut, was published in August 2020.