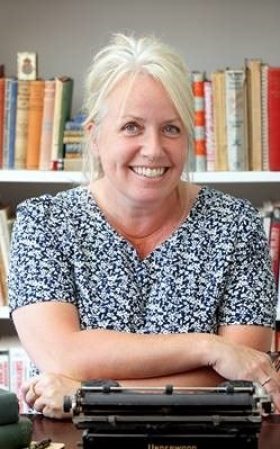 A.J. Pearce was born in Hampshire, UK. She majored in American History at the University of Sussex, spending her Junior Year at Northwestern University in Illinois, USA.

She began writing as a hobby in 2005. In 2012 she came across a 1939 copy of a weekly women’s magazine and had the idea of writing a novel set in wartime London.

In 2016, following a seven-publisher auction in the UK, Dear Mrs Bird was acquired by Picador, and in the USA by Scribner after a similarly competitive auction. Dear Mrs Bird was published in hardback in the UK in April 2018, becoming a Sunday Times Top 10 Bestseller two weeks later. It has been sold for translation in thirteen other countries.

In 2019, Dear Mrs Bird was a Richard and Judy Book Club pick. It was shortlisted for the Debut of the Year at the 2019 British Book Awards as well as the Royal Society of Literature Sir Christopher Bland Prize, and long listed for the inaugural Comedy Women in Print award.

In July 2019 it was further longlisted for the Goldsboro Books Glass Bell Award, and the Historical Writers' Association's Debut Crown 2019 for the best historical debut.AJ is currently writing her second novel, the sequel to Dear Mrs Bird.