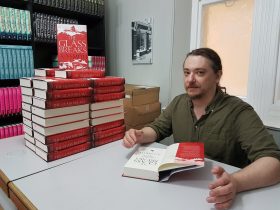 A.J. Smith has been writing stories set in the lands of The Long War since he was at university. Defining the world and adding detail became an excellent distraction from his degree (which was in psychology, philosophy and sociology) and has remained equally distracting ever since. Interestingly, the maps came first, and then the world and its characters began to take shape in the writing.

Since graduating, he has been working with troubled children in a high school in Luton and has had various articles related to counselling and youth work published. Fantasy fiction has always been his own version of therapy and a place where he can make up what happens next rather than waiting for the real world to decide.