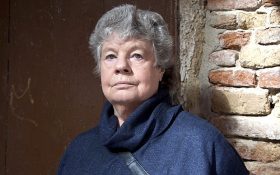 Dame Antonia Susan Duffy, known professionally as A.S. Byatt, is an English novelist, poet and Booker Prize-winner. In 2008, The Times newspaper named her on its list of the 50 greatest British writers since 1945.

She has written critical studies of Dame Iris Murdoch, who was a friend, mentor and a significant influence on her own writing. Also known for her short stories, Byatt has been influenced by Henry James and George Eliot as well as Emily Dickinson, T.S. Eliot and Robert Browning, in merging realism and naturalism with fantasy. Her story collections include Sugar and Other Stories (1987); The Djinn in the Nightingale's Eye (1994), a collection of fairy tales; Elementals: Stories of Fire and Ice (1998); and Little Black Book of Stories (2003). The Matisse Stories (1993) features three pieces, each describing a painting by Henri Matisse, each the tale of an initially smaller crisis that shows the long-present unravelling in the protagonists' lives. Her books reflect a continuous interest in zoology, entomology, geology and Darwinism among other repeated themes.

Byatt has written for media including the British journal Prospect, The Guardian, The Times and The Times Literary Supplement. She has been a judge on many literary award panels including the Hawthornden Prize, the Booker, David Higham Prize for Fiction and the Betty Trask Award.