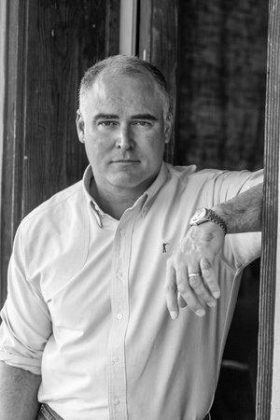 Ace Atkins is an American journalist and author. Atkins worked as a crime reporter in the newsroom of The Tampa Tribune before he published his first novel, Crossroad Blues, in 1998. He became a full-time novelist at the age of 30.

While at the Tribune, Atkins earned a Pulitzer Prize nomination for a feature series based on his investigation into a forgotten murder of the 1950s. The story became the core of his critically acclaimed novel, White Shadow. In his next novels, Wicked City and Devil's Garden, Atkins continued this kind of story-telling, a style that was compared to that of Dennis Lehane and George Pelecanos.

Each novel contains bits of himself – friends and colleagues he once knew, people he respected or admired, family members, and personal heroes. In Devil's Garden, Atkins explores the early life of one of those heroes: Dashiell Hammett, the originator of the hard-boiled crime novel. Atkins' 2010 novel, Infamous, is based on the 1933 Charles Urschel kidnapping and subsequent misadventures of the gangster couple George "Machine Gun" and Kathryn Kelly.

In 2011 Atkins was selected by the estate of Robert B. Parker to take over writing the Spenser series of novels.

Atkins lives on a historic farm outside Oxford, Mississippi with his family. He graduated from Auburn University in 1994 and lettered for the Auburn University football team in 1992 and 1993. He was featured on the Sports Illustrated cover commemorating the Tigers' perfect 11-0 season of 1993. The cover shows Atkins celebrating after sacking future Heisman Trophy winner Danny Wuerffel of the Florida Gators. Atkins wore number 99 for the Tigers.