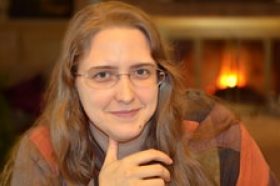 Ada Palmer is an author of science fiction and fantasy, a historian and a composer. She is a current finalist for the John W. Campbell Award for Best New Writer and her debut novel, Too Like the Lightening, Book 1 of the Terra Ignota series, is a Hugo Award Finalist for Best Novel.

The novel is also the winner for the 2017 Compton Crook Award and was included in many 'Best SFF' lists in 2016, including Barnes & Noble's and the Guardian's, and was a Goodreads Choice Award Nominee for Best Science Fiction as well as Tor.com's Reviewer Choice.

Ada Palmer teaches in the History Department at the University of Chicago, and did her PhD at Harvard University. She composes close harmony folk music with mythological, science fiction and fantasy themes, and performs with the a cappella group, Sassafrass. She also studies the history of manga anime, especially the 'God of Manga' Osamu Tezuka, blogs for Tor.com and writes the history / philosophy blog ExUrbe.com.