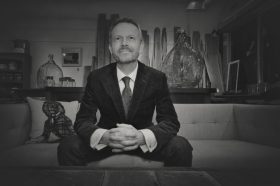 Adam Brookes was born in Canada, but grew up in the UK, in a village in Oxfordshire. In the 1980s, he studied Chinese at the School of Oriental and African Studies in London, and went on to become a journalist, working briefly in magazines before landing a post as a 'copytaster' at the BBC, a job now extinct.

Adam became a radio producer at the BBC World Service, and then a foreign correspondent, based first in Indonesia, then China and the United States, where he now lives. Along the way he has reported from some thirty countries including Iraq, Afghanistan, North Korea and Mongolia, for BBC television and radio.

Night Heron was his first novel, drawing on his life in journalism, his years in China, and his efforts to understand something of what goes on in the world of intelligence. It was published in May 2014 by Little Brown/Sphere in the UK, Hachette/Redhook in the US, and in six other countries. His second novel, Spy Games, was published in August 2015 in the USA, and published November 2015 in the UK.

His third novel, The Spy's Daughter, was published in July, 2017 in the UK, and October in the US.