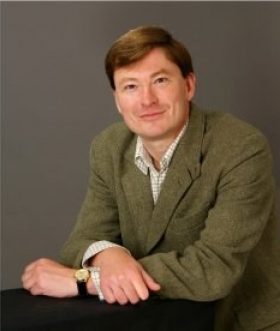 Adrian Goldsworthy was born in 1969. He was educated up to the age of sixteen at Westbourne House Preparatory School and Westbourne Boys College in Penarth, South Wales. He attended the Sixth Form at Stanwell Comprehensive School for his A-Levels. From there he went to St John's College, Oxford University and took a First in Ancient and Modern History. Remaining at St John's, he was awarded a D.Phil. in Literae Humaniores (Ancient History) in 1994. The topic of his thesis was 'The Roman Army as a fighting force, 100 BC-AD 200'. A modified version of this was subsequently published in the Oxford Monographs series under the title of The Roman Army at War, 100 BC - AD 200 (1996). This remains in print and is one of the best selling works in the series.

He was a Junior Research Fellow at Cardiff University for two years and subsequently taught part-time at King's College London and was an assistant professor on the University of Notre Dame's London programme for six years. He also did bits and pieces of teaching at other universities. He has lectured on a range of topics, including both Greek and (particularly) Roman History, but also taught a course on the military history of the Second World War at Notre Dame.

Teaching is tremendous fun, but writing is even more enjoyable and in the last few years he has given up teaching to write full time. Best of all this avoids the vast weight of administrative work now inevitable in any university post. It is still nice to give lectures and attend conferences, but only when time permits.