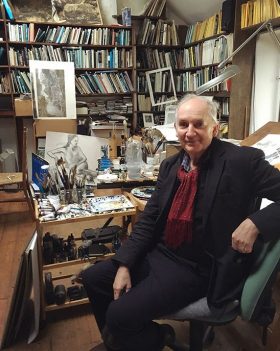 Alan Lee was born in Middlesex, 1947 and is an English book illustrator and movie conceptual designer. He studied at the Ealing School of Art.

He has illustrated dozens of fantasy books, including some non-fiction, and many more covers. Several works by J.R.R. Tolkien are among his most notable interiors: the Tolkien centenary edition of the Lord of the Rings (1992), a 1999 edition of The Hobbit that has been boxed with it, and Narn i Chîn Húrin (2007). The latter, a first edition, is his most widely held in WorldCat participating libraries. Other books has illustrated include Faeries (with Brian Froud), Lavondyss by Robert Holdstock (as well as the cover of an early print of this book), The Mabinogion (two version), Castles and Tolkien's Ring (both non-fiction by David Day), The Mirrorstone by Michael Pailin, The Moon's Revenge by Joan Aiken, and Merlin Dreams by Peter Dickinson.

He has also illustrated retellings of classics for young people. Two were Rosemary Sutcliff's versions of the Iliad and the Odyssey - namely, Black Ships Before Troy (Oxford, 1993) and The Wanderings of Odysseus (Frances Lincoln, 1995). Another was Adrian Mitchell's version of Ovid's Metamorphoses - namely Shapeshifters (Frances Lincoln, 2009).

Lee did cover paintings for the 1983 Penguin edition of Mervyn Peake's Gormenghast trilogy. He also did the artwork for Alive!, a CD by the Dutch band Omnia, released on 3 August 2007 during the Castlefest festival.