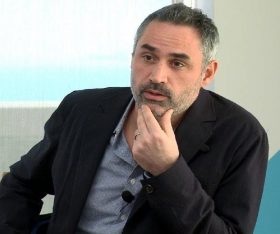 Alex Garland was born in London in 1970. He is an English novelist, screenwriter, film producer and director. Garland attended the independent University College School, in Hampstead, London, and the University of Manchester, where he received a BA degree in History of Art in 1992.

His first novel, The Beach, was published in 1996 and drew on his experiences as a backpacker. The novel quickly became a cult classic. The Beach has been translated into twenty-four languages, has won a prestigious Betty Trask Award and was also adapted into a hugely successful feature film. The Tesseract, Garland's second novel, was published in 1998. This was also made into a film, starring Jonathan Rhys Meyers. In 2002, he wrote the screenplay for Danny Boyle's 28 Days Later, starring Cillian Murphy. His third novel, The Coma, was published in 2004 and was illustrated with woodcuts by his father, Nicholas Garland. In 2005, a script for a film adaptation of Halo was written by Garland. In 2007, he wrote the screenplay for the film Sunshine. Garland also served as an executive producer on 28 Weeks Later, the sequel to 28 Days Later. He is the co-writer on the video game Enslaved: Odyssey to the West for the PlayStation 3 and Xbox 360.

He wrote the screenplay for the film Never Let Me Go, based on the novel by Kazuo Ishiguro. He also wrote the script for Dredd, an adaptation of the Judge Dredd comic book series from 2000 AD.