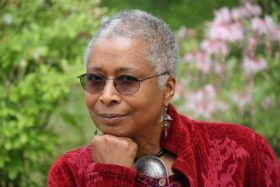 Alice Walker is an internationally celebrated writer, poet and activist whose books include seven novels, four collections of short stories, four children’s books, and volumes of essays and poetry. She won the Pulitzer Prize in Fiction in 1983 and the National Book Award.

Her work, including the international bestseller The Colour Purple, has been translated into more than two dozen languages, and her books have sold more than fifteen million copies. Along with the Pulitzer Prize and the National Book Award, Walker, in 2006, was honored as one of the inaugural inductees into the California Hall of Fame. In 2007, her archives were opened to the public at Emory University in her birth state of Georgia. In 2010 she presented the keynote address at The 11th Annual Steve Biko Lecture at the University of Cape Town, South Africa, where she met the beautiful sons of Steve Biko, and was awarded the Lennon/Ono Peace Grant in Reykjavik, Iceland, where she met John Lennon and Yoko Ono’s “beautiful boy” Sean Lennon.