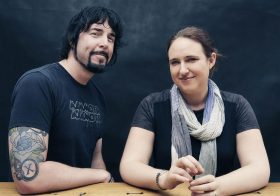 Her multi-award winning work is slated for publication in over 30 countries, and has been described as “a game-changer” (Shelf Awareness), “stylistically mesmerising” (Publishers Weekly) and “out-of-this-world awesome” (Kirkus). Her series include The Illuminae Files, The Aurora Cycle, the Other Side of the Sky duology, The Starbound Trilogy, the Unearthed duology and The Elementals Trilogy.

Her work is in development for film and TV, and has taken home multiple Aurealis Awards, an ABIA, a Gold Inky, made multiple best-of lists and been shortlisted for the Prime Minister’s Literary Awards. Amie lives in Melbourne, Australia with her family.

Jay Kristoff is the New York Times and internationally bestselling author of The Lotus War, The Illuminae Files and The Nevernight Chronicle.

He is the winner of two Aurealis Awards, an ABIA, nominee for the David Gemmell Morningstar and Legend awards, named multiple times in the Kirkus and Amazon Best Teen Books list and published in over twenty-five countries, most of which he has never visited.

He lives in Melbourne, Australia with his wife, and dog.