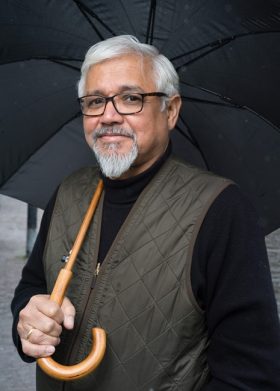 Amitav Ghosh was born in Calcutta and grew up in India, Bangladesh and Sri Lanka. He studied in Delhi, Oxford and Alexandria and is the author of The Circle of Reason, The Shadow Lines, In An Antique Land, Dancing In Cambodia, The Calcutta Chromosome, The Glass Palace, The Hungry Tide and The Ibis Trilogy, consisting of Sea of Poppies, River of Smoke and Flood of Fire. His most recent book, The Great Derangement: Climate Change and the Unthinkable, a work of non-fiction, appeared in 2016.

In 2007 he was awarded the Padma Shri, one of India's highest honors, by the President of India. In 2010 he was a joint winner, along with Margaret Atwood of a Dan David prize, and 2011 he was awarded the Grand Prix of the Blue Metropolis festival in Montreal. In 2018 the Jnanpith Award, India’s highest literary honor, was conferred on Amitav Ghosh. He was the first English-language writer to receive the award. In 2019 Foreign Policy magazine named him one of the most important global thinkers of the preceding decade.

Amitav Ghosh's most recent novel, Gun Island, was published in 2019.