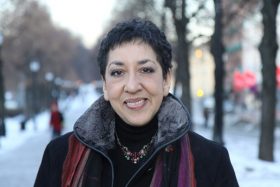 Andrea Levy was born in England to Jamaican parents who came to Britain in 1948.

After attending writing workshops when she was in her mid-thirties, Levy began to write the novels that she, as a young woman, had always wanted to read - entertaining novels that reflect the experiences of black Britons.

She was the author of seven novels, Every Light in the House Burnin', Never Far From Nowhere, Fruit of the Lemon, Small Island, Six Stories and an Essay, Uriah's War and The Long Song. She had been a judge for the Orange Prize for Fiction, Orange Futures and the Saga Prize, and has been a recipient of an Arts Council Award.

Andrea's final novel, The Long Song, was published in September 2019 by Tinder Press.