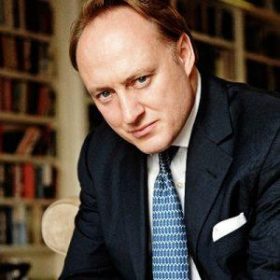 Andrew Roberts (FRHistS) was born in 1963 and is an historian and journalist. He is a Visiting Professor at the Department of War Studies, King's College London, a Roger and Martha Mertz Visiting Research Fellow at the Hoover Institution at Stanford University and a Lehrman Institute Distinguished Lecturer at the New York Historical Society. Roberts was educated at Gonville and Caius College, Cambridge, where he earned a first-class degree in Modern History.

His public commentary has appeared in several periodicals such as the Daily Telegraph and the Spectator. Roberts himself is possibly best known internationally for his 2009 non-fiction work The Storm of War, which covers historical facts of WW2, such as Hitler's rise to power and the organisation of Nazi Germany. The book has been lauded by several publications such as The Economist, and it additionally received the British Army Military Book of the Year Award 2010.

In addition, since 1990, Roberts has addressed hundreds of institutional and academic audiences in many countries, including a lecture to George W. Bush at the White House.