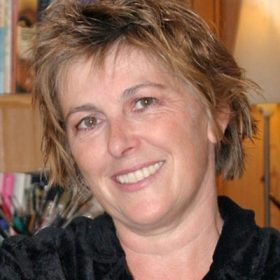 Angie Sage was born in 1952, and is the author of the Septimus Heap series which includes Magyk, Flyte, Physik, Queste, Syren, Darke and Fyre, the final book which is scheduled to come out later in 2013. She also wrote The Magykal Papers, an additional book with extra information about Septimus' world. Angie is also the illustrator and/or writer of many children's books, and is the new writer of the Araminta Spookie series.

Angie Sage grew up in Thames Valley, London and Kent. Her father was a publisher. He would bring home blank books that she could fill with pictures and stories. Sage first studied medicine, but changed her mind and went to Art School in Leicester. There she studied Graphic Design and Illustration. She began illustrating books after college. Then she progressed to writing children stories, including toddler books and chapter books. Her first novel was Septimus Heap: Magyk.

Angie Sage is married and has two daughters.