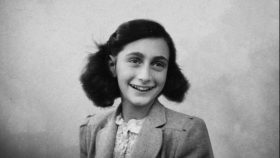 Anne Frank was born in the German city of Frankfurt am Main in 1929.

When Anne's older sister, Margot, received a call-up to report for a so-called ‘labour camp’ in Nazi Germany on 5 July 1942, her parents were suspicious. They did not believe the call-up was about work and decided to go into hiding the next day in order to escape persecution.

In the spring of 1942, Anne’s father had started furnishing a hiding place in the annex of his business premises at Prinsengracht 263. He received help from his former colleagues. Before long, they were joined by four more people. The hiding place was cramped. Anne had to keep very quiet and was often afraid.

On her thirteenth birthday, just before they went into hiding, Anne was presented with a diary. During the two years in hiding, Anne wrote about events in the Secret Annex, but also about her feelings and thoughts. In addition, she wrote short stories, started on a novel and copied passages from the books she read in her Book of Beautiful Sentences. Writing helped her pass the time.

When the Minister of Education of the Dutch government in England made an appeal on Radio Orange to hold on to war diaries and documents, Anne was inspired to rewrite her individual diaries into one running story, titled Het Achterhuis (The Secret Annex).

After her death in the concentration camp, Bergen-Belsen, Anne's writing made a deep impression on her father, Otto, the only surviving member of the family. He read that Anne had wanted to become a writer or a journalist and that she had intended to publish her stories about life in the Secret Annex. Friends convinced Otto to publish the diary and in June 1947, 3,000 copies of Het Achterhuis (The Secret Annex) were printed.

And that was not all: the book was later translated into around 70 languages and adapted for stage and screen. People all over the world were introduced to Anne's story and in 1960 the hiding place became a museum: the Anne Frank House. Until his death in 1980, Otto remained closely involved with the Anne Frank House and the museum: he hoped that readers of the diary would become aware of the dangers of discrimination, racism, and hatred of Jews.