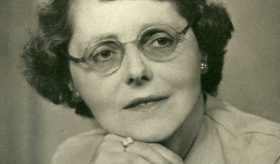 Anthony Gilbert, the pen name of Lucy Beatrice Malleson (15 February 1899 – 9 December 1973), was an English crime writer who was a cousin of actor-screenwriter Miles Malleson. She also wrote fiction as Anne Meredith and the autobiography Three-a-Penny (1940) under the Meredith name.

Lucy Malleson was born in London. When her stockbroker father lost his job the family suffered financial hardship, and she took up shorthand typing to earn a living. She began writing poetry, and then, inspired by the play The Cat and the Canary by John Wollard (1922), she tried her hand at detective novels.

While Malleson's books sold well enough to keep publishers asking for more, she was never a best-seller. However, in 2017 interest in her was revived through the reissue of the Anne Meredith crime novel Portrait of a Murderer under the British Library's Crime Classics imprint.