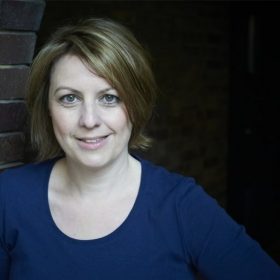 Antonia Hodgson was born in Derby and studied English Language and Literature at the University of Leeds. She moved to London in 1994 where she began a career in publishing.

In 2014 Hodder published her debut, The Devil in the Marshalsea (spoiler alert: no vampires). Set in September 1727, it introduced Tom Hawkins - a lovable/infuriating young rake - who is forced to investigate a murder in the debtors’ prison in order to save his own life.

The book was shortlisted for several prestigious prizes including the Theakston’s Crime Novel of the Year, and was the winner of the CWA/Endeavour Historical Dagger. It was also chosen for the Waterstones Book Club and the Richard & Judy Book Club. It has been translated into several languages.

The series continued with the critically acclaimed The Last Confession of Thomas Hawkins and A Death At Fountains Abbey. In February 2017 she published her first short story - The Night Before the Hanging - as part of the Quick Reads crime anthology.

Antonia's new book, The Silver Collar, is due for publication in August 2020.