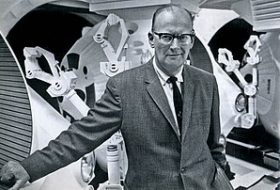 He co-wrote the screenplay for the 1968 film 2001: A Space Odyssey, one of the most influential films of all time.

For many years Clarke, Robert Heinlein and Isaac Asimov were known as the "Big Three" of science fiction.