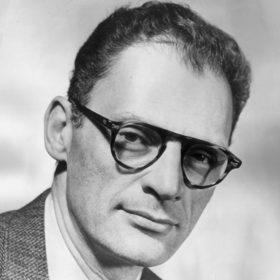 Arthur Miller was born October 17, 1915 and was an American playwright, who combined social awareness with a searching concern for his characters’ inner lives. He is best known for Death of a Salesman.

Miller was shaped by the Great Depression, which brought financial ruin onto his father, a small manufacturer, and demonstrated to the young Miller the insecurity of modern existence.

His first public success was with Focus (1945), a novel about anti-Semitism. All My Sons (1947) was next, a drama about a manufacturer of faulty war materials. It won Miller a Tony Award, and it was his first major collaboration with the director Elia Kazan, who also won a Tony.

Miller’s next play, Death of a Salesman, became one of the most famous American plays of its period.