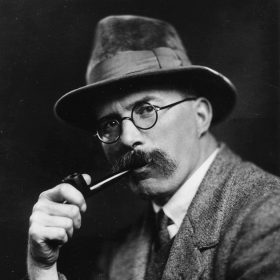 Arthur Ransome was born in Leeds in 1884.

He went to Russia in 1913 to study folklore and in 1914, at the start of World War I he became a foreign correspondent for the Daily News. In 1917 when the Russian Revolution began he became a journalist and was a special correspondent of the Guardian.

On their return to England, he bought a cottage near Windermere in the Lake District and began writing children's stories. In a 1958 author's note, Ransome wrote: ‘I have been often asked how I came to write Swallows and Amazons. The answer is that it had its beginning long, long ago when, as children, my brother, my sisters and I spent most of our holidays on a farm at the south end of Coniston. We played in or on the lake or on the hills above . . . Going away from it we were half drowned in tears. While away from it, as children and as grown-ups, we dreamt about it. No matter where I was, wandering about the world, I used at night to look for the North Star and, in my mind's eye, could see the beloved sky-line of great hills beneath it. Swallows grew out of those old memories. I could not help writing it. It almost wrote itself.’

He published the first of his children's classics, the twelve Swallows and Amazons books, in 1930. In 1936 he won the first ever Carnegie Medal for his book, Pigeon Post. He died in 1967.