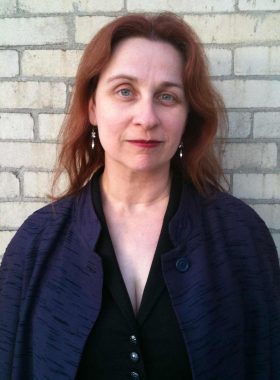 Audrey Niffenegger, born June 13, 1963, is a writer and artist. She is also a professor in the MFA Creative Writing Program at Columbia College Chicago.

Niffenegger's debut novel, The Time Traveller's Wife (2003), was a national bestseller. It is an unconventional love story that centers on a man with a strange genetic disorder that causes him to unpredictably time-travel and his wife, an artist, who has to cope with his constant absence.

Her Fearful Symmetry (2009), Niffenegger's second novel, is set in London's Highgate Cemetery where, during research for the book, Niffenegger acted as a tour guide.

Niffenegger has also published graphic and illustrated novels including: The Adventuress (2006), The Three Incestuous Sisters (2005), The Night Bookmobile (2009), and Raven Girl (2013). Raven Girl was adapted into a ballet by Resident Choreographer Wayne McGregor and the Royal Opera House Ballet (London) in 2013.