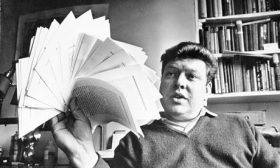 Bryan Stanley Johnson was born in 1933, and was an English experimental novelist, poet and literary critic. He also produced television programmes and made films.

Once he graduated from Kings College London, Johnson wrote a series of increasingly experimental and often acutely personal novels that would now be considered visual writing.

After his first few published novels, Johnson's work became progressively even more experimental. The Unfortunates (1969) was published in a box with no binding (readers could assemble the book any way they liked, apart from the chapters marked 'First' and 'Last' which did indicate preferred terminal points) and House Mother Normal was written in purely chronological order such that the various characters' thoughts and experiences would cross each other and become intertwined, not just page by page, but sentence by sentence.

Johnson also made numerous experimental films, published poetry, and wrote reviews, short stories and plays. For many years he was the poetry editor of Transatlantic Review.