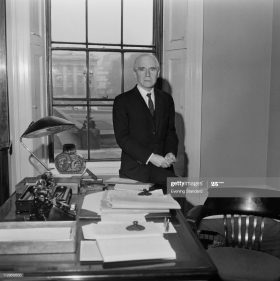 Basil Gray was an art historian, Islamicist, and the head of the British Museum's Oriental department.

Following graduation in 1927 Gray travelled to the Schönbrunn Palace and Osterreichisches Museum in Vienna to view Mughal's paintings. While he Vienna, he studied under Josef Strzygowski, and developed a friendship with Otto Demus, art historian and Byzantinist. Following this he worked with art historian David Talbot Rice at the British Academy excavations of the palace of the Byzantine emperors in Constantinople.

He became the temporary Director of the British Museum in 1968, and retired in 1969. During retirement his focus turned to the relationship between Chinese ceramics and Persian painting. As an art historian Gray wrote exhibition guides and books on Orientalism and Islamic Art.