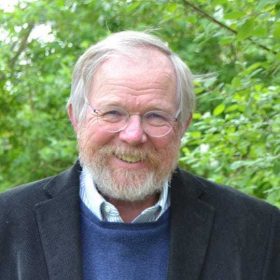 William McGuire "Bill" Bryson, OBE, FRS was born in Des Moines, Iowa, in 1951. He settled in England in 1977, and worked in journalism until he became a full time writer. He lived for many years with his English wife and four children in North Yorkshire. He and his family then moved to New Hampshire in America for a few years, but they have now returned to live in the UK.

In The Lost Continent, Bill Bryson's hilarious first travel book, he chronicled a trip in his mother's Chevy around small town America. It was followed by Neither Here Nor There, an account of his first trip around Europe. Other travel books include the massive bestseller Notes From a Small Island, which won the 2003 World Book Day National Poll to find the book which best represented modern England, followed by A Walk in the Woods (in which Stephen Katz, his travel companion from Neither Here Nor There, made a welcome reappearance), Notes From a Big Country and Down Under.

Bill Bryson has also written several highly praised books on the English language, including Mother Tongue and Made in America. In his last book, he turned his attention to science. A Short History of Nearly Everything was lauded with critical acclaim, and became a huge bestseller. It was shortlisted for the Samuel Johnson Prize, before going on to win the Aventis Prize for Science Books and the Descartes Science Communication Prize. His next book, The Life and Times of the Thunderbolt Kid, is a memoir of growing up in 1950s America, featuring another appearance from his old friend Stephen Katz.