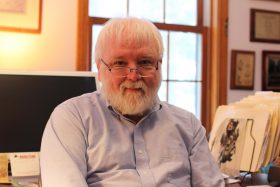 Brendan DuBois of New Hampshire is the award-winning author of twenty novels and more than 150 short stories. His novel, Resurrection Day, won the Sidewise Award for Best Alternative History Novel of the Year. In addition to his thrillers, Brendan DuBois is the author of the Lewis Cole mystery series.

He is currently working on a number of writing projects with New York Times bestselling author James Patterson,

His short fiction has appeared in Playboy, The Magazine of Fantasy & Science Fiction, Ellery Queen’s Mystery Magazine, Alfred Hitchcock’s Mystery Magazine, Analog, and numerous other magazines and anthologies including The Best American Mystery Stories of the Century, published in 2000 by Houghton-Mifflin. Another one of his short stories appeared in in The Year's Best Science Fiction 22nd Annual Collection.