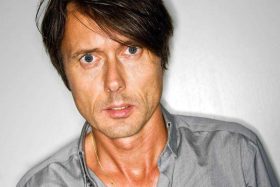 Brett Anderson is an English singer-songwriter best known as the frontman of indie-rock band Suede (1989-2003, 2010-present).

Anderson is known for his distinctive wide-ranging voice and, during Suede's early days, his androgynous appearance.

His first memoir, Coal Black Mornings, was published to critical acclaim in 2018, and a second volume, Afternoon With the Blinds Drawn was released in late 2019.