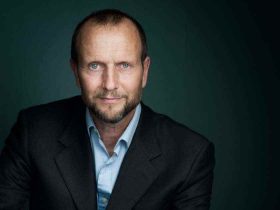 Chris (C.C.) Humphreys was born in Toronto, lived till he was seven in Los Angeles, then grew up in the UK. All four grandparents were actors, and since his father was an actor as well, it was inevitable he would follow the bloodline.

Chris has performed on stages from London's West End to Hollywood. Bizarrely, he was also the voice of Salem the cat in Sabrina the Teenage Witch.

A playwright, fight choreographer and novelist, he has written eleven adult novels including The French Executioner, runner up for the CWA Steel Dagger for thrillers; The Jack Absolute Trilogy; A Place Called Armageddon; Shakespeare's Rebel and the international bestseller, Vlad - The Last Confession.

His novel is Chasing the Wind about 1930's aviatrix - and thief! - Roxy Loewen, was published published in June 2018.