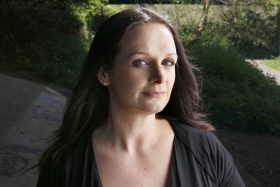 Cally Taylor was born in Worcester and spent her early years living in various army camps in the UK and Germany. She studied Psychology at the University of Northumbria and went on forge a career in instructional design and e-Learning before leaving to write full time in 2014.

She started writing short stories in 2005 and was published widely in literary and women’s magazines. She also won several short story competitions. In 2009 and 2011 her romantic comedy novels (as Cally Taylor) were published by Orion and translated into fourteen languages. Whilst on maternity leave with her son Cally had an idea for a psychological thriller and turned to crime.

Since then, Cally has published seven adult thrillers, with Strangers being the most recent (April 2020, HQ).

C.L. Taylor lives in Bristol with her partner and young son.