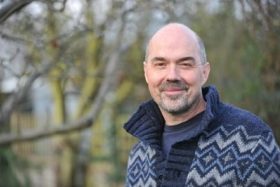 Beckett was educated at the Dragon School in Oxford and Bryanston School in Dorset, England. Beckett began writing SF short stories in 2005. His first SF novel, The Holy Machine, was published in 2007. He published his second novel in 2009, Marcher, based on a short story of the same name. Dark Eden was shortlisted for the 2012 BSFA Award for Best Novel.

Dark Eden now has two sequels: Mother of Eden and Daughter of Eden.