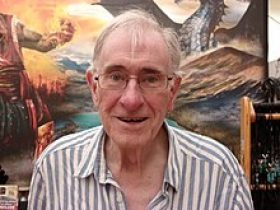 Christopher Priest is a British novelist and science fiction writer. His works include Fugue for a Darkening Island, The Inverted World, The Affirmation, The Glamour, The Prestige and The Separation.

Priest has been strongly influenced by the science fiction of H.G. Wells, and in 2006 was appointed Vice-President of the international H.G. Wells Society.

Priest's first story, "The Run", was published in 1966. Formerly an accountant and audit clerk, he became a full-time writer in 1968. His most recent novels are The Islanders (2011), set in the Dream Archipelago, and The Adjacent (2013), a multi-strand narrative with recurring characters.

Of his narrative's plot twists, Priest told an interviewer in 1995, "my shocks are based on a sudden devastating reversal of what the reader knows or believes."