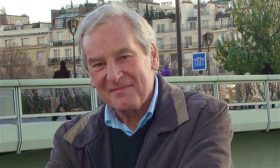 Craig Thomas was a Welsh author of thrillers, most notably the Mitchell Gant

His best-known novel was Firefox, which brought him to global prominence and spawned a success film adaptation, directed by and starring Clint Eastwood. After publishing his third novel, the Cold War espionage thriller Wolfsbane, he left teaching altogether, in 1977. His later books include Snow Falcon and A Different War. Shortly before his death he finished a two-volume commentary on German philosopher Freidrich Nietzsche and Kenneth Aubrey series of novels.