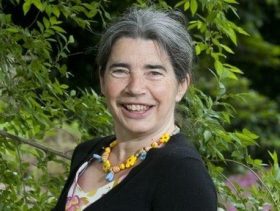 Debi Gliori is a Scottish writer and illustrator of children's books.

She started writing children's books in 1976 and attended art school in Edinburgh from 1979 to 1984. She then received an Drew Grant travelling scholarship award to go to Milan, and worked as a freelance from 1984. In 1989, independent children's book publisher Walker Books signed her, and she acquired an agent.

Gliori is the creator of many children's books including the Mr Bear picture book series. She wrote the black comedy Pure Dead series for older children, with Pure Dead Magic being her first novel.