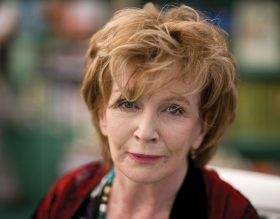 Edna O'Brien is an Irish novelist, memoirist, playwright, poet and short story writer. She is considered the "doyenne" of Irish literature. She was the winner of the 1993 Writer's Guild Prize for Fiction. Her biography of James Joyce was published by Weidenfeld & Nicolson in June 1999. In 2001 her documentary novel, In the Forest - about a brutal murder on the west coast - caused a furor in her native Ireland. It was the subject of a BBC Omnibus film and was later shortlisted for Irish Book of the Decade.

O'Brien now lives in London. She received the Irish PEN Award in 2001. Saints and Sinners won the 2011 Frank O'Connor International Short Story Award, the world's richest prize for a short story collection. In 2018 she received the PEN/Nabokov Award. Faber and Faber published her memoir, Country Girl, in 2012. Her most recent novel is Girl, based on the kidnapping of the Boko Haram girls, published by Farrar, Straus & Giroux.