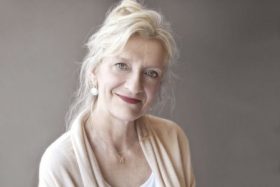 Elizabeth Strout is a US-American novelist and author. She is widely known for her works in literary fiction and her descriptive characterisation.

Strout's first novel, Amy and Isabelle met with widespread critical acclaim, became a national bestseller, and was adapted into a movie. Her third novel, Olive Kitteridge, was published to critical and commercial success grossing nearly $25 million with over one million copies sold as of May 2017. The novel won the 2009 Pulitzer Prize for Fiction. The book was adapted into a multi Emmy Award-winning mini series and became a New York Times bestseller.

Five years later, she published The Burgess Boys, which became a national bestseller. My Name Is Lucy Barton was met with international acclaim and topped the New York Times bestseller list. Lucy Barton became the main character in Strout's 2017 novel, Anything is Possible.

A sequel to Olive Kitteridge, titled Olive, Again, was published in 2019.