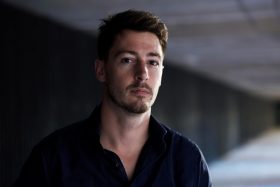 Guy Bolton lives in London. After graduating with a 1st in Film & Literature from Warwick University, he worked in corporate video, music promos and television.

Guy's first novel The Pictures, a detective thriller set in 1930s Hollywood, was shortlisted for a CWA Dagger award and was listed as one of the top 10 crime books of 2017 by the Telegraph, The Times and the Mail on Sunday. The sequel, The Syndicate, was released in 2019 to equally positive reviews.