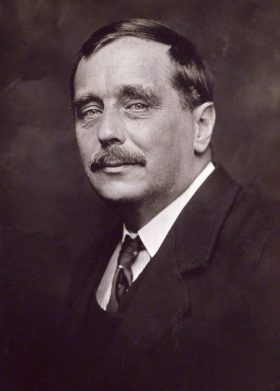 Herbert George Wells was an English writer. Prolific in many genres, he wrote dozens of novels, short stories, and works of social commentary, history, satire, biography and autobiography. His work also included two books on recreational war games. Wells is now best remembered for his science fiction novels and is often called the "father of science fiction", along with Jules Verne and the publisher Hugo Gernsback.

Wells rendered his works convincing by instilling commonplace detail alongside a single extraordinary assumption – dubbed “Wells's law” – leading Joseph Conrad to hail him in 1898 as "O Realist of the Fantastic!". His most notable science fiction works include The Time Machine, The Island of Doctor Moreau, The War of the Worlds and the military science fiction The War in the Air. Wells was nominated for the Nobel Prize in Literature four times.