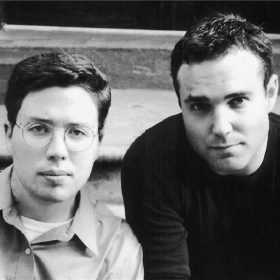 Ian Caldwell is an American novelist known for co-authoring the 2004 novel The Rule of Four. His second book, The Fifth Gospel, was published in 2015.

Dustin Thomason is an American writer and producer. Thomason co-created Hulu's Castle Rock and ABC drama The Evidence and has executive produced numerous television series, including Fox's Lie to Me and WGN America's Manhattan.

Caldwell and Thomason met in Fairfax County, Virginia, after both graduated from the Thomas Jefferson High School for Science and Technology in 1994. Upon graduating from their respective colleges, Caldwell began working with Thomason on the novel The Rule of Four. After writing together for a summer, the two continued to collaborate online and by telephone for the next five years. The plot centres on four Princeton seniors attempting to solve a mystery related to the Hypnerotomachia Poliphili, an Italian work from the early Renaissance. The book was published by Dial Press in 2004, spent 49 weeks on The New York Times Best Seller list and has sold almost 2 million copies. It was often compared to Dan Brown's novel, The Da Vinci Code due to its similar style of teaching history through a fictional plot as well as the proximity in date of publication.