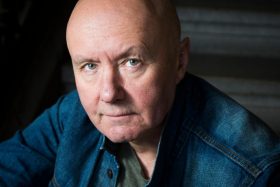 Irvin Welsh is a Scottish novelist, playwright and short story writer. His novel Trainspotting was made into a film of the same name. His work is characterised by a raw Scots dialect and brutal depiction of Edinburgh life. He has also written plays and screenplays, and directed several short films.

Welsh's tenth novel, released in April 2016, is titled The Blade Artist, and centres around a seemingly rehabilitated Trainspotting character Francis Begbie now living in California with a wife and children. It was shortlisted for the Fiction Book of the Year at the Saltire Literary Awards 2016.