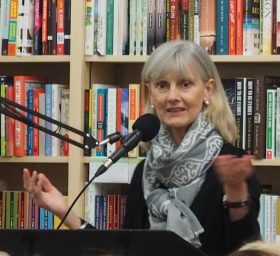 Jacqueline Winspear is a mystery writer, author of the Maisie Dobbs series of books exploring the aftermath of World War I. She has won several mystery writing awards for books in this popular series.

Winspear was born on April 30, 1955, and raised in Kent. She was educated at the University of London's Institute of Education and then worked in academic publishing, higher education and in marketing communications. She emigrated to the United States in 1990. Winspear stated that her childhood awareness of her grandfather's suffering in World War I led to an interest in that period.