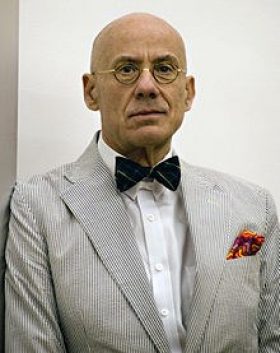 James Ellroy is an American crime fiction writer and essayist. Ellroy has become known for a telegrammatic prose style in his most recent work, wherein he frequently omits connecting words and uses only short, staccato sentences, and in particular for the novels, The Black Dahlia, The Big Nowhere, L.A. Confidential, White Jazz, American Tabloid, The Cold Six Thousand and Blood's a Rover.

Hallmarks of his work include dense plotting and a relentlessly pessimistic - albeit moral - worldview. His work has earned Elroy the nickname "Demon dog of American crime fiction."

Ellroy writes longhand on legal pads rather than on a computer. He prepares elaborate outlines for his books, most of which are several hundred pages long.