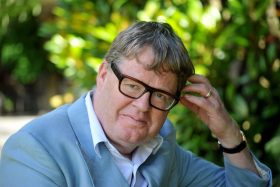 James Runcie is a British novelist, documentary film-maker, television producer and playwright. He is Commissioning Editor for Arts on BBC Radio 4, a Fellow of the Royal Society of Literature, and a visiting professor at Bath Spa University.

Runcie has written the novels Canvey Island, The Discovery of Chocolate, The Colour of Heaven and East Fortune. In 2012, the publication of Sidney Chambers and the Shadow of Death drew a favourable critical reception. The book, which consists of six short standalone mysteries, is the first in a series of six works of detective fiction, entitled The Grantchester Mysteries.

Runcie is published by Bloomsbury Publishing. His sleuth novels have been adapted as an ITV drama titled Grantchester. Filmed on location in Grantchester, Cambridge and London, the initial six-part series was shown in the UK in Autumn 2014. The second to fifth series were broadcast respectively in 2016, 2017, 2019, and 2020.